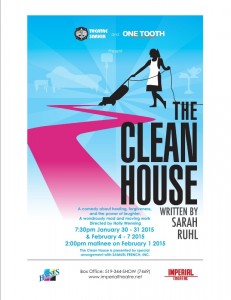 One of the highlights of this production is periods of one-on-one interaction between and Henri Canino. These two ladies are literally pillars for live theatre in Sarnia and it showed. The electricity between them crackled with a life of its own whenever the onstage banter went back and forth between them specifically.

The entire cast was stellar. Megan Hadley’s portrayal of the driven and deeply repressed ‘Lane’ depicted a woman so completely locked within her facade of composure that she was literally fighting herself to escape. Henri Canino’s depiction of ‘Virginia was of repression rooted in feelings of being suppressed by external sources, hence the ongoing flits of physical gestures that often contradicted her verbal statements. She captured the sense of “not being able to control those” beautifully. Jay Peckham made the character of ‘Charles’ completely sympathetic while giving his moments ‘Matilde’s father the aura of a driving force in the lives of people around him.

The work done by Ashley Carlisle as ‘Matilde’ and Jan Holt as ‘Ana’ stands on its own level. Both worked with accent coaches Renata Lima DeCastro and Petra Ramos to be able to function convincingly with dialects from South America and they succeeded wonderfully. There was never a sense they were anything but what they portrayed. Carlisle especially, made the sections she delivered in Portuguese seem so natural it felt as if she could have done the entire play in that language. Holt’s ‘Ana’ was so vivacious it became easy to see why one would be captivated by her regardless of what their situation in life was.

The set, designed by Bill Allingham and Paul Baert, was an elaborate portrait of chic fashion but as cold and lacking in charm as a rubber room; completely in keeping with the stiffly orchestrated lifestyle the character ‘Lane’ created for her environment. The lighting, by Matt Leslie and Paul Richardson, set the tone for events and worked nicely to direct how eyes followed the action. Decor, established by Director Holly Wenning, was used to great effect in shaping characters and events. Costumes, done by Norma Wenning, and makeup by Linda Agocs and Ruth Francoeur, were implemented ingeniously. Projections, designed by Frank Canino, kept the running joke alive during the most serious parts of the production. The sheer volume of entries and exits made keeping the action flowing an enormous task but Stage Manager Marc Arseneau with assistance Joe Agocs and Linda McLeish did a marvellous job.

Director Holly Wenning maintained the balance between humour and pathos in writer Sarah Ruhl’s narrative beautifully and drew fantastic performances from her cast. ‘The Clean House’ is very funny and extremely thought provoking. In its world rules are broken, which is much of the genius of the piece and why it’s not a piece of theatre that’s typical in any way. As her notes state, the time to just go with it is when it doesn’t make sense.

That’s an accurate view of how life works, and this particular one is very entertaining. The amount of applause that happened between scenes reflected that more accurately than anything that can be said here.

This performance took place at the Imperial Theatre in Sarnia Ontario on Friday January 30, 2015. The article was written to convey impressions of what it was like to be at the show. The production runs through to February 7, 2015.