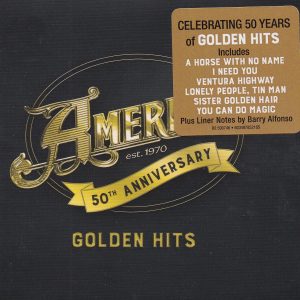 America celebrates its half-centennial this year with a trio of compilations that follow the iconic Grammy-winning band to the top of the pop charts, across musical eras, and deep into the hearts of innumerable fans. The multi-platinum-selling group - led by founding members Gerry Beckley and Dewey Bunnell and known for their memorable and dynamic live performances - have also announced a series of live dates celebrating the anniversary and are on tour now.

The three-disc version of 50th ANNIVERSARY: THE COLLECTION brings the core of America’s recorded legacy together with choice rarities like an early studio recording of “Ventura Highway,” a live performance of “Riverside,” and an unreleased demo for the #1 hit “Sister Golden Hair.” All of the band’s Top 10 singles are included here: “Horse With No Name,” “Ventura Highway,” “Tin Man,” “Lonely People” and more.