First Friday at the Cheeky Monkey: BobCatz Use Colour To Give Classic Songs A Shot In The Arm
by Brian Hay

“Life is like a box of chocolates — you never know what you’re gonna get”.
That famous line from a well-known film (the name of which escapes me) is one that truly applies to the acts that the Cheeky Monkey brings to Sarnia’s First Friday Celebrations. They’ve featured performers playing from an array of genres with the only common denominator being that they’re good.

With the BobCatz several of the musicians involved were familiar. Vocalist and keyboard player Robert Martin performed with the Casuals not long ago. Wulf Von Waldow brings his excellence on the saxophone to a number of local bands. Clarinettist and sax man Michael Murphy is prominent and anyone from the area who 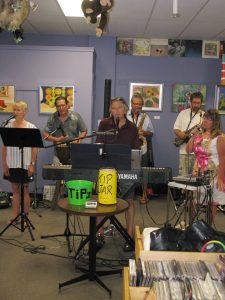 doesn’t know Mike Blackmore probably lives in a cave. Harmony singer Sue Furlotte and Sue Auty, who sang both lead and backing vocals provided some of the evening’s surprises.

They were nice ones. The harmony work delivered by Sue Furlotte and Sue Auty was a delight. Their timing was good and both ladies modulated their volume to support whoever was singing lead nicely. Sue Auty made the joy of hearing a great voice for the first time happen again. Power and exceptional pitch made her voice soar through the room. Sensitive delivery combined with a spectrum of colour shadings gave it the deepest of expressions.

Where this group excelled lay in the colouring their arrangements had. The jazz influence behind Robert Martin lent hints of that genre to their arrangements and it was reinforced by much of what was played by Wulf. The timing in their harmony vocals carried a subtle essence of the formality that’s essential to performance of Classical music. That possibly originated with Sue Furlotte. Mike used his drum to create a pulse that all of the members locked into. Their material was a who’s-who of iconic oldies made new by their approach. One song in particular really placed things in perspective.

It’s been ages since ‘Route 66’ landed on these ears and it’s never sounded like that. It was new again, and in more ways than one. Everything they played shone with that quality. It was a good night.

To view more photos taken during the evening by both Roland (Grumpy) and Brian Hay, please click HERE