FALL OUT BOY - SAVE ROCK AND ROLL

Fall Out Boy is a pop punk band from Wilmette,  Illinois, formed in 2001. The
band consists of vocalist/guitarist Patrick Stump, bassist Pete Wentz, guitarist Joe Trohman and drummer Andy Hurley. Fall Out Boy broke out of the underground music scene and reached mainstream success with their major label album From Under The Cork Tree. Released in 2005, the album won several awards and achieved double platinum status after selling more than 200,000 albums in Canada! 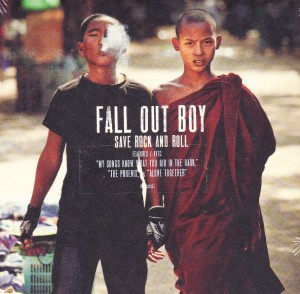 In 2007, Fall Out Boy released their third album Infinity On High, to major chart
success, debuting at #2 on the Billboard 200 in Canada and selling over 21,000 copies in its first week. The group released Folie A Deux in 2008 and further evolved their musical palette. The group announced an indefinite hiatus in late 2009, stating that they have not broken up, rather that the members are taking a rest and engaging in various side projects. On Feb. 4th, 2013 the band announced the end of their hiatus and release of their new single “My Songs Know What You Did In The Dark (Light Em Up)” and forthcoming 5th studio album titled Save Rock and Roll.