FOREIGNER - LIVE AT THE RAINBOW 78

Experience Foreigner Live at the Rainbow Theatre – Straight From 1978

On April, 27 1978, Foreigner played a sold-out show at London’s celebrated Rainbow Theatre. Forty years later, the memorable performance by the original band has been restored from the original film reels, remixed and remastered for an 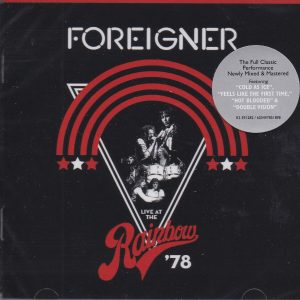 LIVE AT THE RAINBOW ’78 includes hit singles “Feels Like The First Time” and “Cold As Ice,” from their eponymous debut album, as well as tracks from their Double Vision album, “Hot Blooded” and “Double Vision.”

With ten multi-platinum albums and sixteen Top 30 hits, Foreigner is universally hailed as one of the most popular rock acts in the world with a formidable musical arsenal that continues to propel sold-out tours and album sales, now exceeding 75 million. At Foreigner’s core is founder and lead guitarist Mick Jones, the visionary maestro whose stylistic songwriting, indelible guitar hooks and multi-layered talents continue to escalate Foreigner’s influence.