This may be James Hunter’s fourth album, but it is his first on Daptone. Produced by 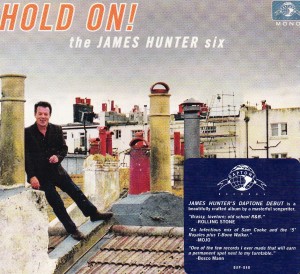 Daptone’s own Bosco Mann (Gabriel Roth) at Penrose Recorders (Daptone West) near his home in Riverside, CA, Hold On! is a perfect portrait of an artist at the top of his game.

James Hunter has been on the scene for enough years to acquire plenty of feathers in his cap. Billboard charts, Grammy nominations, and Van Morrison collaborations aside, he has earned an international reputation as a Rhythm and Blues troubadour for his command of the microphone both on stage and in studio. This album, however, is something far deeper than just another notch in his belt. It is truly an artist’s vision come to fruition.