Most Unusual vinyl pressing made…

Found a really interesting website that lists some of THE most unusual records ever pressed. Unusual is an understatement. These are just really cool. I’ll add one per week to the list - so check back often…

Glass disc recordings, produced photographically in the 1880’s by Volta Laboratory Associates - Alexander Bell, his cousin Chichester Bell and Charles Sumner Tainter. Smithsonian officials unsealed them in the presence of Bell’s daughters and a grandson in 1937. You can hear the audio from these records here and here.

French DJ and producer Breakbot had a limited pressing of 120 copies of his single By Your Side that was cast in edible chocolate and was intended to be played only once and then eaten. Gibonni had his album 20th Century Man pressed onto chocolate, with the following statement: “I read that chocolate contains a hormone of happiness and boosts your libido, so I thought it was a perfect combination for the rock based on music we loved in the 1980s”. Also, watch the video below of a guy making and listening to a chocolate record. 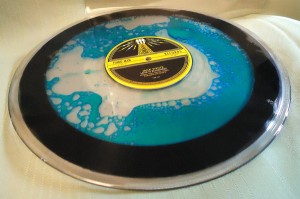 As a special Record Store Day 2012 release, Jack White put out a translucent blue liquid-filled version of Sixteen Saltines from his debut album, Blunderbuss.  When the vinyl played, you could watch the blue water slosh around inside the record. 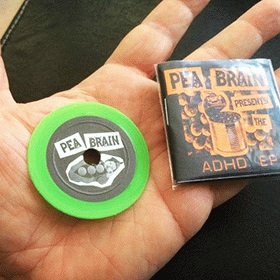 Details from the label - “Well, here it is at long last! They said it couldn’t be done! Hell, they said it shouldn’t be done! PEABRAIN zine is proud to present the smallest compilation record ever made! 2 inches (yes really!) of tiny songs from 6 Southampton and Portsmouth punk bands - The Shorts, Black Anchor, Joythief, Shooting Fish, Chemical Threat, and Baby Jugglers - 10 seconds each, on pea green vinyl, all wrapped in a 24 page issue of PEABRAIN zine #3. The zine you can read between meals without filling yourself up. 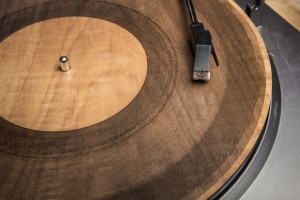 Laser cut into maple. Think it’s Velvet Underground with Nico playing on the video.  Sound quality is not good, but still cool it can be done at all.  Video also shows laser cutting a Joy Division song into a piece of plastic. 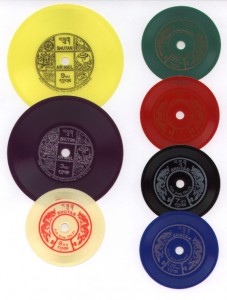 The Postage Stamps That Double as Phonograph Records

Bhutan, the tiny country up in the Himalayas famous for its Gross National Happiness measurement, can be a whimsical sort of place. Take a look at these postage stamps. They’re actually playable phonograph records. What do these records contain? Well, the Bhutanese national anthem, for one. CLICK HERE to give a listen 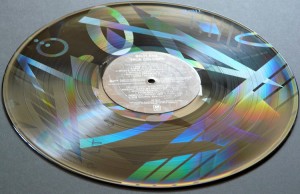 Normally, laser etching is only done on a non-playable side of a vinyl record. However, with some tweaking, laser etching can be done also on the groove side of the record without affecting the playing grooves. If hit by a light, the etching reflects in polychromatic colors. Watch a video  of Split Enz’s True Colours spinning on a turntable.  If you look in our REcycled vinyl, you can find this treasure.  Great album by the way - yes we have it in our personal collection.

GLOW IN THE DARK VINYL

Ray Parker Jr.’s Ghostbusters Soundtrack (30th Anniversary edition) had a glow in the dark release for 2014 Record Store Day and was limited to 5.000 copies. Watch a video of some glow in the dark vinyl records by CLICKING HERE.

Third Man Records was handling the vinyl release of the soundtrack to Baz Luhrmann’s The Great Gatsby. Their limited-edition version of the soundtrack is pioneering a never-before released method for vinyl records. Both LPs in the set are blindingly reflective metallized discs. Disc one is platinum and disc two is gold. These are the first-ever commercially available records made using these precious metals via this process. Not stopping there, the records come housed in an entirely unique laser-cut wooden LP jacket riveted to aluminum spines. All of these elements (gold, platinum, aluminum, wood and brass) showcase the Art Deco-meets-modern style, classic meets cutting edge, which is the essence of The Great Gatsby film and Third Man Records.

Shout Out Louds, a band from Sweden managed to create a playable ice disk for their single ‘Blue Ice’ in collaboration with TBWA Stockholm. The track can be recreated on a record player but only a few people got the chance to use it. They sent a kit to ten select people along with a set of instructions on how to make the album, along with a mold and a bottle of water. CLICK HERE for a quick video showing how it works.

The Flaming Lips’s human blood-filled release of their album Heady Fwends was available for $2,500 in a limited edition of 10 copies, with all of the proceeds going to The Oklahoma Humane Society as charity. Among the celebrities who give their blood samples were Nick Cave, Erykah Badu, Coldplay’s Chris Martin and Ke$ha. Also, Harry Manfredini’s Friday The 13th (Original Motion Picture Score), created by Waxwork Records, was released on a limited (100 copies) blood-filled liquid vinyl. 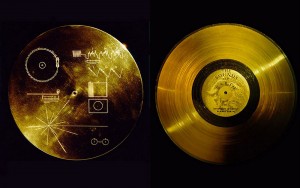 The Voyager Golden Records are phonograph records that were included aboard both Voyager spacecraft launched in 1977. They contain sounds and images selected to portray the diversity of life and culture on Earth, and are intended for any intelligent extraterrestrial life form, or for future humans, who may find them. The contents of the record were selected for NASA by a committee chaired by Carl Sagan of Cornell University. Sagan and his associates assembled 116 images and a variety of natural sounds, such as those made by surf, wind, thunder and animals (including the songs of birds and whales). To this they added musical selections from different cultures and eras, spoken greetings in 55 ancient and modern languages, and printed messages from United States president Jimmy Carter and U.N. Secretary-General Kurt Waldheim.

As explained by lathecuts.com: “These are not a direct substitute for pressed records. These are 100% hand-made, in real time. If the record is 10 minutes long, it took 10 minutes to cut plus setup time. This labor, coupled with the maintenance and knowledge required makes these lathe-cuts more expensive (per piece) than a larger pressing of vinyl. These records should be treated like, and priced as unique works of art. It is like the difference between selling a cheap gift shop print of a painting and an original artist print of that painting.” Watch an instructional video on Son Lux’s 3-hole, 4-sided Lanterns 10″ below. 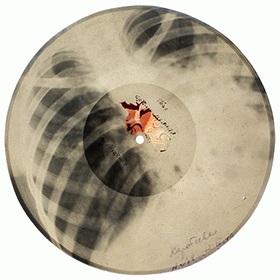 In the cold war era Soviet Union, bootleggers built homemade recording machines and ingeniously copied and pressed forbidden records by the state on discarded X-Rays which they clandestinely obtained from hospitals. They would etch a copy of a record into the X-Ray, cut it into a circle with scissors, and use a cigarette to burn a hole in the middle, allowing the record to be played on any record player. 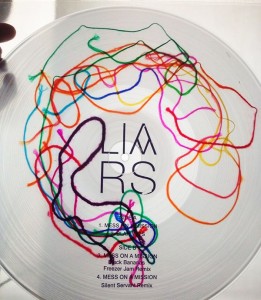 The New York art-rock band Liars released Mess on a Mission, a single to their Mess album, on a string embedded 12″ for Record Store Day 2014. Limited to 1.000 copies worldwide the record is a clear vinyl pressing with colored string pressed inside it. Angus Andrew of Liars said: “We talked about the idea for days but weren’t at all sure it could physically be done. After all, pressing bits of colored string into the actual vinyl was nothing we’d ever heard of before. To us it seemed like such a unique and interesting way to extend the visual language of Mess right inside the music.”

A zoetrope is one of the pre-cinema animation devices that produce the illusion of motion by displaying a sequence of drawings or photographs showing progressive phases of that motion. Zoetrope vinyl releases have printed or etched images on them that produce continuous moving pictures when spun on a record player. These mesmerizing animations come to life when you apply a strobing light to the record, film it at 25 frames per second or look at it through a bespoke viewer. Watch this video of Sculpture’s Plastic Infinite 7″ to get a glimpse.