PETER GARBIEL - BACK TO FRONT 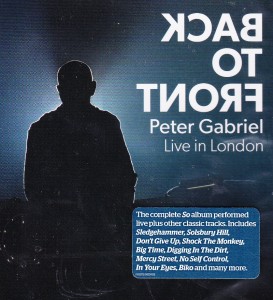 landmark album “So”. To mark the event Gabriel reunited his original “So” touring band from 1986/87 and for the very first time fans saw them play the multi-platinum selling album in its entirety. Whilst the core of the performance is the “So” album, there is so much more to the concert with unfinished, previously unreleased and re-imagined songs sitting effortlessly alongside classic hits reflecting what a multi-dimensional artist Peter Gabriel is. With innovative lighting and staging, “Back To Front” offers a visual and narrative feast that puts the viewer inside a concert like never before.

Bonus Features The Visual Approach – featurette on the creation of the live show.