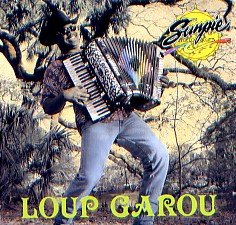 The way this CD starts out, you might not want to listen to it alone in the woods on a moonlit night, when the Loup Garou might be on the prowl. So real are the sound effects on the title cut of Loup Garouthat one may begin to believe in the legendary werewolf of the bayou country. Bruce Sunpie Barnes has created a colorful rendition of the folktale — if it is just a story. There are bloodcurdling howls and scary laughter, courtesy of Barnes’ voice, along with his atmospheric harmonica riffs and screeches and wails from Jerry Embree’s saxophone. After they get the blood pumping with a good scare, Bruce Sunpie Barnes & the Louisiana Sunspots set about the 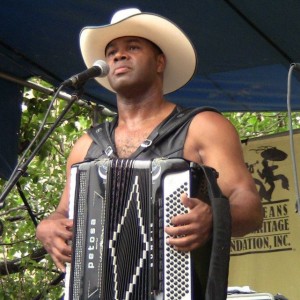 business of producing blues and zydeco for dancing. Most of the tunes are written by the bandleader of multifarious talents. He sings and plays many instruments, he used to be a pro-football player with the Kansas City Chiefs, he’s been on television and in the movies, and he’s a park ranger and naturalist at Jean Lafitte National Park. But when there’s music to play, he’s well focused on that, playing zydeco and blues infused with his own special flavor. Not born to the tradition, Barnes has incorporated many of its elements while adding some ingredients of his own.Barnes displays his versatility with his “Blues in the Morning,” a cover of Herbie Mann’s “Memphis Underground,” and a plaintive ballad called “Quand J’Etais Jeune.” And there are plenty of dance tunes on this recording to keep the zydeco buff busy.