THE ROLLING STONES - 50 AND COUNTING

Having been a long-time Rolling Stones fan and not missing a farewell tour since the early 1980’s, it was unavoidable that I would find a way to attend the most recent farewell show the band had at the Air Canada Center on May 25, 2022 - regardless of the high ticket price. With one exception all previous shows had been huge stadium shows, ranging from very good (Steel Wheels at Lansing) to old and tired (Comerica Park’s Biggest Band tour) so the Air Canada show seemed almost intimate compared to some of the shows from the past.

This is the first show that I have attended where the Stones did not have an opening act, opting instead for more Rolling Stones - they played for a full 2 and a half hours with plenty of highlights. They hit the stage at 8:45 with the usual opener on this tour Get Off My Cloud. The sound was a bit muddy, which was soon rectified, but the band was in fine form. 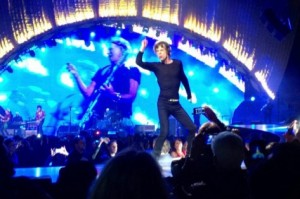 After a couple more tunes, the Stones launched into Gimme Shelter - with Lisa Fisher who brought down the house with  a stellar vocal performance. The band then went into Angie - the first time that it was played on this tour.

A special thing that the band is doing on the tour is allowing fans to pick a song from their vast catalog for each show. In Toronto the choice was Street Fighting Man and the band played it with a vengeance.  A nice feature of the show was the band not only played some of their biggest hits, but they sprinkled some of the lesser known and lesser played such as Emotional Rescue, doing a different version than the original record.

Emotional Rescue was followed by It’s Only Rock N Roll and as with previous shows there was a special guest vocalist on the show, this time being Carrie Underwood, who did a fine job trading vocal lines with Mick. 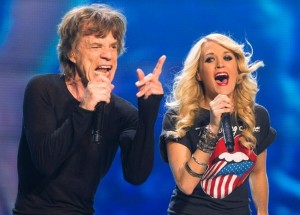 The obligatory new songs Doom and Gloom and One More Shot followed. They were reasonably well received but also the low point of the show as the songs were not of the quality of the rest of the set. The band kicked into Honky Tonk Women after that, the show was flawless. Keith took over for two songs You Got the Silver and Happy, both of which featured his guitar playing partner Ron Wood prominently.

When Jagger returned he also brought out with him another Mick as in Mick Taylor. What followed was an extended and brilliant version of Midnight Rambler. Unfortunately the Toronto audience did not get to hear Can’t You Hear Me Knocking, which the band had played a few nights earlier in Los Angeles. Miss You, Start Me Up, Tumbling Dice and Brown Sugar all followed and those in the audience that were not on their feet from the start of the show soon joined.  It was amazing to watch Jagger, a man who will turn 70 in a couple of months move around and all over the stage with the energy and stamina of a 20 year old. 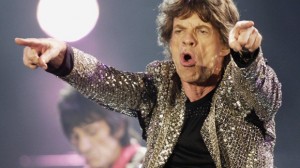 After a very brief break for a costume change the band returned with yet another highlight Sympathy For The Devil. The slightly  different arrangement and extra long version brought new life into the fan favorite. And then it was goodnight - but not quite.

The Cawthra Park Secondary School Chamber Choir took the stage, set up on either side of the band for an outstanding version of You Can’t Always Get What You Want, which started off the encore set. Jumpin Jack Flash and Satisfaction rounded out the set, both played with lots of energy despite the fact that it was about the 10,000th time those songs were played. Mick Taylor joined the band for Satisfaction which went on for a long time while Jagger pranced, danced and did that thing that only he can do to the audience.

I don’t know if this will be last of the farewell shows, perhaps, perhaps not, but it was the finest of all the shows that I have witnessed. You forget early during the show that these are old men and from that point on bask in the knowledge that you are witnessing the all time greatest Rock N Roll band on earth.

Fantastic blog, Grumpy. Really wish I had been there. So happy you and Mary Anne attended this “farewell tour.”

good write up, and yes so glad you and maryanne were able to attend…there are some things in life we just have to do…