Monty Python’s Spamalot as presented by Theatre Sarnia @ Imperial Theatre runs until May 24. Contact the theatre for details.

Where to start on this one?

The “Knights” of the Round Table were cast and played to perfection. Phil Bedard and Craig Gander’s performances as ‘Sir Belvedere’ and ‘Sir Bors’ were the most straight-laced character portrayals of the lot and they balanced the absurdities displayed by the rest nicely. Shawn Chapman imbued ‘Sir Galahad’ with a balanced mix of debonair charm and self-effacing piety. Adam Hobbs injected the most purely comic role of ‘Sir Robin’ with flair worthy of the source material. Cian Poore blended ‘Lancelot’s’ machismo with the character’s “sensitive side” beautifully and Shane Davis gave a brilliantly deadpanned performance as the regal (but moronic) ‘Arthur’. 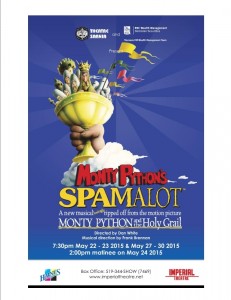 The supporting players were superb as well. Ian Alexander combined shrewd intelligence with a doltish perona to make the character ‘Patsy’ both bright and sympathetic. Max Major and Darryl Heater gave the production some of its funniest moments with their work as ‘The Black Knight’ and ‘Prince Herbert’. John Reid fit well into several hats with appearances as ‘The Historian’, ‘Not Dead Fred’, ‘The Minstrel’ and ‘Herbert’s Father’. As ‘The Lady of the Lake’, Olivia Gogas controlled her lovely voice to maintain a sense of sublime beauty even when the music called for her delivery to be so overwrought it took on the essence limburger cheese. But, finding and holding that balance has always been the key to the Python material, and she did it brilliantly, as did the entire troupe.

Smaller key roles such as the ‘Voice of God’ and ‘The Wedding Guard’ were handled with flair by David Evans and David Chaulk with everything else falling to the fifteen person ensemble. They took on everything from segments that involved choral singing to the intricate dance sequences set in place by Choreographer Bethany Tiegs and managed it all beautifully. The wardrobe designs of Arlene Duckert and Jan Seabrook echoed the ideas of the original work nicely and carried their personal stamp as well. The lighting set up Matt Leslie created suited the nature of the material while keeping the sense of it being a “Broadway Show” at the fore. The projections, and especially the animations he used, embodied the atmospheric essence of the Monty Python glory days fabulously well. Dan Tidball’s work on the sound insured that even the most complex segments carried nicely. The various set pieces designed by Dan White, Cian Poore and the ensemble used an array of striking pieces support the varied scenic demands.

Director Dan White drew performances that were deliciously over the top yet wonderfully human from all the players. The standard of their singing was consistently high and their timing on spoken delivery was exceptional. Often as not it was the asides that came out of the blue that had audience members in stitches. Stage Manager Gord Bristo used the mobility of the set pieces and the activity of the sequences to keep the brisk pace of White’s storytelling flowing smoothly. The music was delivered magnificently, with all its lushness and humour, under the direction of Frank Brennan. Producer Emily MacDonald brought all the right people needed to bring the life in the material to the stage.

Theatre Sarnia’s production of ‘Spamalot’ captures the facets of insanity, absurdity and shrewd commentary of the Monty Python classic brilliantly. It’s a production that’s not to be missed.

This performance took place at the Imperial Theatre on Friday May 22, 2015. The article was written to convey impressions of what it was like to be there and this reviewer suggests getting tickets quickly. The house was close to full and, if anything, the reaction from the audience suggests the remaining performances should sell out quickly. I hope so. This group deserves that kind of recognition. 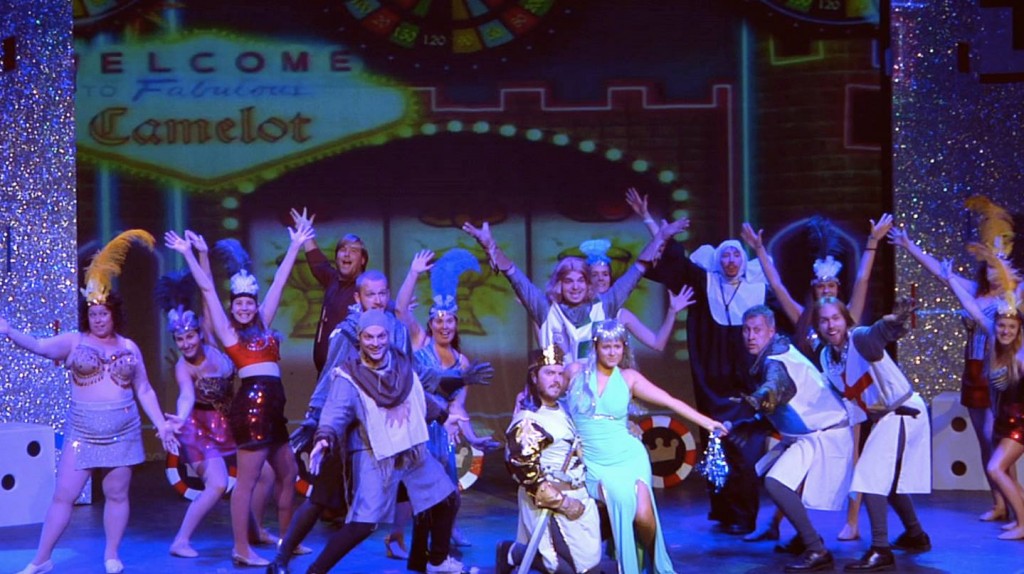