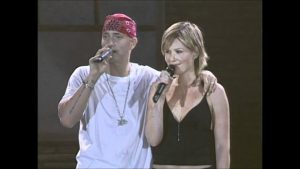 Q. Which rapper sampled the song ‘Thank You’ by Dido

A. Eminem sampled this on his 2000 song “Stan.” Dido appears in the video as Stan’s wife, and sang this with Eminem on some of his tour dates.

This became a hit in the US after it was sampled by Eminem. The album, which is her first, had been out for a year and a half by then. It was released as a single after it gained popularity from “Stan.” It was Dido’s 3rd single, after “Here With Me” and “No Angel.”

Eminem did not ask permission to use this on “Stan” until after the song was produced. Dido loved it agreed to let him use it. She recalled to Billboard magazine in a 2013 interview: “I just got a letter saying, ‘We heard your track. We love it. We’d like to use it for this track “Stan.” Can you take a listen? I hope you like it and can we use your song?’ It was completely out of the blue. I put it on like, ‘I wonder what he could have done.’ You just don’t know. And I was a big Eminem fan, so it was pretty cool. And then I heard it. I remember because I had some friends staying in the same hotel. They were literally running down the hall, like ‘You gotta listen to this; it’s just brilliant!'”