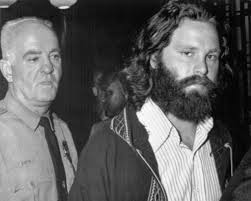 A.  He exposed himself.

On March 1, 1969, at the Dinner Key Auditorium in the Coconut Grove neighborhood of Miami, The Doors gave the most controversial performance of their career, one that nearly “derailed the band”. The auditorium was a converted seaplane hangar that had no air conditioning on that hot night, and the seats had been removed by the promoter in order to boost ticket sales.

Morrison had been drinking all day and had missed connecting flights to Miami, and by the time he eventually arrived the concert was over an hour late in starting, and he was, according to Manzarek, “overly fortified with alcohol”.  The restless crowd of 12,000, packed into a facility designed to hold 7,000, was subjected to undue silences in Morrison’s singing straining the music from the beginning of the performance. Morrison had recently attended a play by an experimental theater group, The Living Theatre, and was inspired by their “antagonistic” style of performance art saying during the show “The last couple of nights I met some people who where trying to change world” before propositioning the audience to “Take over all the schools”. In the opening number a melody of “Back Door Man” and “Five to One”. Morrison taunted the crowd with messages of both love and hate, saying, “Love me. I can’t take it no more without no good love. I want some lovin’. Ain’t nobody gonna love my ass?” and alternately, “You’re all a bunch of fuckin’ idiots!” and screaming “What are you gonna do about it?” over and over again. As the band began their second number, “Touch Me”, Morrison started shouting in protest forcing the band to a halt. At one point, Morrison removed the hat of an onstage police officer and threw it into the crowd; the officer, in turn, removed Morrison’s hat and threw it. Manager Bill Siddons recalled, “The gig was a bizarre, circus-like thing, there was this guy carrying a sheep and the wildest people that I’d ever seen”.  Equipment chief Vince Treanor said, “Somebody jumped up and poured champagne on Jim so he took his shirt off, he was soaking wet. ‘Let’s see a little skin, let’s get naked,’ he said, and the audience started taking their clothes off.” Having removed his shirt, Morrison held it in front of his groin area and started to make hand movements behind it.  Manzarek later described the incident as a mass “religious hallucination”. 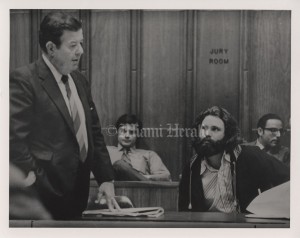 On March 5, the Dade County Sheriff’s office issued a warrant for Morrison’s arrest claiming Morrison deliberately exposed his penis while on stage, shouted obscenities to the crowd, simulated oral sex on guitarist Robby Krieger and was drunk at the time of his performance. Morrison turned down a plea bargain that required The Doors to perform a free Miami concert. He was later convicted, sentenced to six months in jail, with hard labor, and ordered to pay a $500 fine.  Morrison remained free pending an appeal of his conviction, and would die before the matter was legally resolved. In 2007 Florida Governor Charlie Crist suggested the possibility of a posthumous pardon for Morrison, which was announced as successful on December 9, 2010. Densmore, Krieger and Manzarek have denied the allegation that Morrison exposed himself on stage that night.