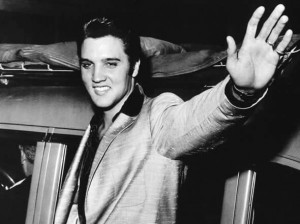 Q.  When was the phrase “Elvis has left the building” first used?

The phrase was first used by promoter Horace Lee Logan  - other claim it is the voice of radio DJ Frank Page.  Which ever one it was, it was on December 15, 1956, near Shreveport, Louisiana, to plead with concert-goers not to leave a concert hall to try to see Elvis outside, as he had already left, and instead remain to see the other acts on the bill. The full quotation was:

Throughout the 1970s, the phrase was captured on record several times, spoken by Al Dvorin. In later years the phrase would be spoken by some of Presley’s backup singers to calm down the audience after concerts.

The phrase has since become a popular culture catchphrase and punchline, used to refer to anyone who has exited in some sense. For instance, it might be used when someone makes a dramatic exit, such as at the end of an argument, partly to relieve tension among those who remain. Baseball announcers on radio or television sometimes use the phrase as a humorous way to describe a home run, which is typically hit over the outfield fence and into the stands, thus leaving the field of play. The hockey announcer Mike Lange uses the phrase when a goal puts the game out of reach, signalling that fans can leave the arena.

Frank Zappa used the phrase on the opening track of the album Broadway the Hard Way, which satirised numerous contemporary figures.

It is referred to in the Dire Straits song “Calling Elvis.”

Professional wrestler Shawn Michaels used a variant of the phrase when leaving the ring after a promo: “Shawn Michaels has left the building.” Michaels has said in several interviews and on his Twitter feed that he is an Elvis fan.

When singing the closing theme to the television series Frasier, Kelsey Grammer sometimes followed the last line with the statement “Frasier has left the building!”

In the film Independence Day, Will Smith’s character says “Elvis has left the building”, which is followed by Jeff Goldblum using another Elvis-related catchphrase “Thank you very much.”