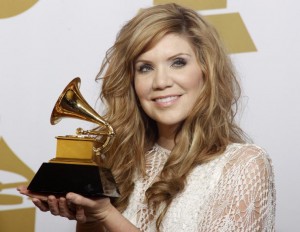 Q.  Which woman has the most Grammy Awards?

Bluegrass singer/muscian Alison Krauss has won a total of 26 Grammy Awards, making her the most honored female solo artist in the history of the ceremony.

She entered the music industry at an early age, winning local contests by the age of ten and recording for the first time at fourteen. She signed with Rounder Records in 1985 and released her first solo album in 1987. She was invited to join the band with which she still performs, Alison Krauss and Union Station (AKUS), and later released her first album with them as a group in 1989.

As of 2012, she has won 27 Grammy Awards from 41 nominations, tying her with Quincy Jones as the most awarded living recipient, second only to the late classical conductor Sir Georg Solti who holds the record for most wins of all time with 31. She is the most awarded singer and the most awarded female artist in Grammy history. At the time of her first, the 1991 Grammy Awards, she was the second youngest winner (currently tied as the ninth youngest).

In 2007, Krauss and Robert Plant released the collaborative album entitled Raising Sand. RIAA-certified platinum, the album was nominated for and won 5 Grammy Awards at the 51st Grammy Awards, including Album of the Year, Best Contemporary Folk/Americana Album, and Record of the Year (“Please Read the Letter”). Krauss and Plant recorded a Crossroads special in October 2007 for the Country Music Television network, which first aired on February 12, 2008.